Today we are going to talk about a rather boring subject on the Internet. The blessed Spam! You know those uninteresting emails we never ask for? That’s what we’re going to talk about. If you stop reading, you’ll find that right now your inbox must be crammed with them, even if you take the necessary steps and be selective about what you choose to receive.

As harmless as spam appears to be, it’s best to avoid it, at least to save yourself the time to delete it or the problems it can bring. Next, you will learn a little more about the supposed emergence of Spam and, of course, how to avoid this “problem” that can affect your website and your productivity.

These days, the word “Spam” means any kind of intrusive and unwanted message. This practice congests the Internet, undermining productivity and disrupting communication. In general, this type of “strategy” is present throughout the Internet, and most of the emails that circulate through inboxes are considered as Spam. Spam messages are used for a variety of purposes, from simple entertainment to causing great financial damage by improperly obtaining data and information.

The funny story that references Spam

Although much talked about and talked about on the Internet and in the business world, the origin of the word Spam is somewhat unknown by most professionals.

That’s right, the term doesn’t make much sense for what it represents, but it all has a story behind it. The original Spam refers to a brand of seasoned ham (or ham, as we know it in Brazil) that was created in 1957 by the company Hormel Foods and is marketed to this day. But you might be wondering: what does this have to do with spam in the form of email? This is exactly what we will explain in the next topic.

Everything indicates that the term became popular in a comical way after an episode by a British comedy group called Monty Python. The hilarious scene took place in one of the nonsense episodes where there were several Vikings in a bar and a couple asking about the house menu. The waitress answers with her annoying voice the names of the dishes that, to be even more annoying, were composed of Spam. Everything had Spam! The funniest thing is that Vikings begin to sing a song in honor of Spam: “Spam, Spam, Spam, Spam, Spam. Wonderful Spam!”.

The first case of Spam

There are many versions of the first case of Spam, even before the practice was common on the Internet. The first case is known to have occurred in 1864 by telegram. On the occasion, dentist Messrs Gabriel “fired” hundreds of unwanted telegrams to members of the British Parliament, with information about the opening hours of his office. The repercussion was so negative that one of the Spam recipients made a public review in the newspaper at the time, The Times of London. The recipient complained about the intrusive attitude, as he had never had any kind of professional relationship with the dentist. 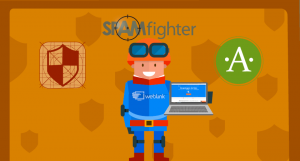 As much as Spam seems to be a harmless practice, there are many harms behind this “strategy” that can harm your business or your work routine. Let’s look at some of the problems caused by Spam.

Wasting time with unwanted messages is one of the main problems (and objectives) of Spam, as the added time spent deleting each message is very relevant.

Speaking of productivity, in the corporate environment, Spam can negatively impact professional productivity with the accumulation of unnecessary messages.

Lost time is a sign of less productivity, and the less you produce, the less you make. But the worst problem with Spam are the scams that come with this practice, as Spam messages usually arrive “stuffed” with viruses or malicious links.

Affects the reputation of your company or brand

Spam is really boring and nobody likes to receive it. By sending Spam, the company or brand in question is generating negative experiences in the consumer’s mind and this can cause long-term damage.

How to solve the Spam problem on the website

Now let’s get to the main point and what matters most in our post. Let’s better understand how to solve this annoying problem and avoid Spam on your website.

Think seriously before posting comments and guestbook on your site

Comments can be good thermometers for measuring the audience and engagement of sites. However, they can also be gateways to the spread of Spam. Famous guestbooks (currently in disuse) can also serve this purpose, but they pose the same risk of being a gateway for spammers to clog a site with unwanted messages.

Contact forms are the main gateways through which Spam’s spread on websites. Thus, it is important to create barriers that prevent these actions. Using multi-step authentication or the famous captchas can be a good solution to avoid this practice, considering that most of the Spam on the website originates from automatic software and scripts. Captchas are images that contain letters and numbers and are difficult to be circumvented by the software used by spammers. This is one of the most effective measures to combat Spam on your website.

Moderating and controlling everything that is posted is also an essential measure to prevent Spam on your site. Before releasing comments, it is important to have a filter to block malicious content. If your site has a members area, this moderation becomes even more important, considering that in addition to Spam, many users can enter the site just to create malicious actions.